How to integerate the git module

Hello,
Recently I asked a question in the community on how the integrate git, a nice commiter answeres my question, recomended me to use the @theia/git and the @theia/scm module. Then I open the souce code of @theia/git module, and find that git module has been implemented in theia core already. Including the frontend and backend, it seems that the writer of theia has already register the git menu and its action.

image902×444 29.4 KB
But in my application I didn’t see any menu relate to git function. So I wonder if I need to include some module in my package.json or if I have already delete some menu node thus cause the problem. Thank you.
vince-fugnitto 4 February 2021 13:10 #2

@LamYunfu given that you included @theia/git and @theia/scm in your application’s package.json, you should have git support when opening workspaces that are under git version control. To verify, you can confirm that the scm view is present in your application: 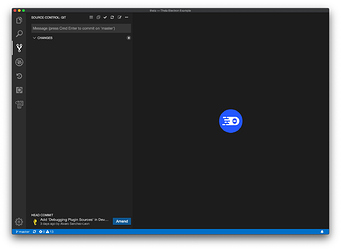 I cannot confirm this is the case without verifying your source-code of any custom extension you may have contributed as part of your application.