How to unregister monaco editor commands

I use monaco editor in theia, but it has command palette and changed all occurrences command, how can I remove it in my monaco editor components 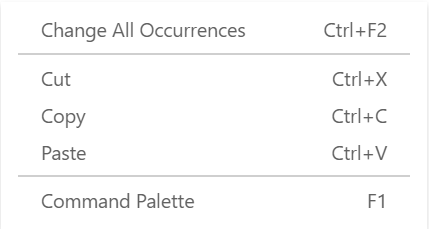 @connor thank you for the discussion, I don’t have a computer with me to try at the moment but have you tried using the unregisterCommand API to unregister the commands you do not want by referencing them by id?

Alternatively you can take a look at the following and rebind it to your custom implementation, removing the commands monaco contributes (however I’m not sure if there any side effects):

@connor Removing a command removes any context menu entries that include it automatically. It might be that monaco registers multiple commands (i.e. different IDs) for the same label. Can you check whether that is the case?