Is there a way to use python in theia terminal?

It’s possible, you can try for yourself: 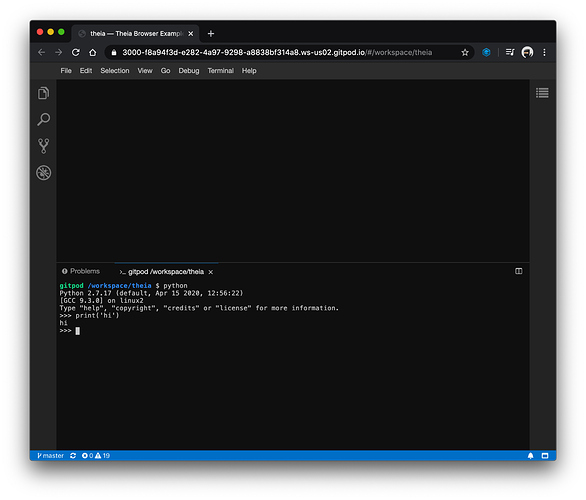 when i run python it doesn’t find it.

@xenfo if you are using a docker image you must make sure that python is available in the image.
Which image are you using?

I am using a ubuntu docker image running the yarn version @vince-fugnitto. I would like to use your Docker Image but I can’t figure out how to fix the graphics.

@xenfo depending on which base image you are using, you will need to update the docker file to include the necessary dependencies you require for your personal needs. I’m not sure what your base image is, but if it’s something like a minimal alpine base, then it’s likely to not include the stuff you require (possibly python). I’m not familiar with the graphics issue, do you mind elaborating?

im using a clean ubuntu image (vm) and I install the dependencies. But if I use yours does it automatically install everything needed?

@xenfo yes, the theia-apps examples contain the necessary dependencies and environment to run theia for the specific language listed. If you want to support multiple types of languages then theia-full would be your best bet, else you can consult the readme to see the list of images available.

@vince-fugnitto i want to use theia-full. How can I do it and how do I fix the UI. I’ve seen the PR but I don’t know where to put the code. I’m new to docker…

The fix is already merged so no need to worry about adding the patch yourself, images are published to dockerhub for you to pull and run. For example, theia-full: https://hub.docker.com/r/theiaide/theia-full

Oh. I guess I was using the wrong version. My bad.

It finally works. Thanks!